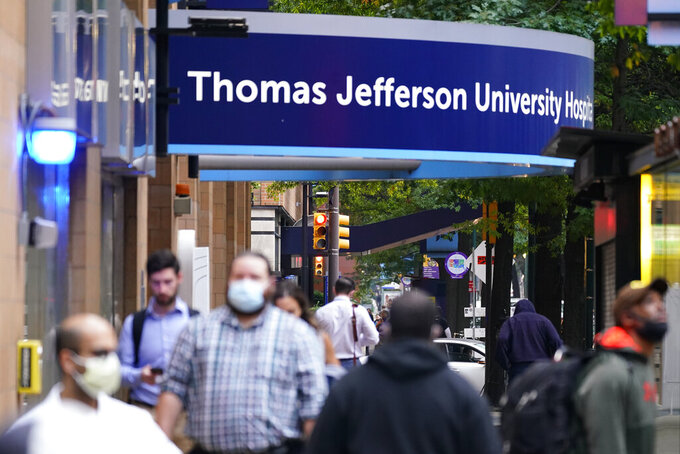 PHILADELPHIA (AP) — A nurse shot and killed a co-worker at a Philadelphia hospital early Monday before fleeing and being shot in a subsequent exchange of gunfire with police that wounded two officers, authorities said.

The 55-year-old nurse was wearing scrubs when he shot his co-worker on the ninth floor of Thomas Jefferson University Hospital just after midnight, Philadelphia Police Commissioner Danielle Outlaw said at an early morning news conference. The 43-year-old certified nursing assistant who was shot was later pronounced dead.

The gunman fled in a box truck, and officers were alerted to his location near a school and found him in body armor and armed with weapons including a rifle and a semi-automatic handgun, police said. He opened fire, and four officers returned fire, critically wounding him in the upper body and neck, police said.

Police said one of the wounded officers had an elbow injury requiring surgery while another was grazed on the nose. Neither wound was considered life-threatening.

Jefferson Health issued a statement Monday afternoon that it does not permit weapons on its campuses and that it had “comprehensive, consistent security measures and processes in place to ensure the safety of our patients, students, staff and visitors."

“Safety and security is a top priority for Jefferson. A thorough review will take place to ensure best practices in our safety protocols for all Jefferson facilities," said the statement. It added that counseling will be available to all employees and patients and officials were cooperating with law enforcement.

Mayor Jim Kenney said in Twitter posts that he visited with the wounded officers early Monday “to thank them for their heroic work and wish them a speedy recovery."

“Their quick response in finding the perpetrator stopped this situation from escalating further," he said in commending police and first responders while decrying “weaponry that is far too powerful being in the hands of people who shouldn’t have access to them."