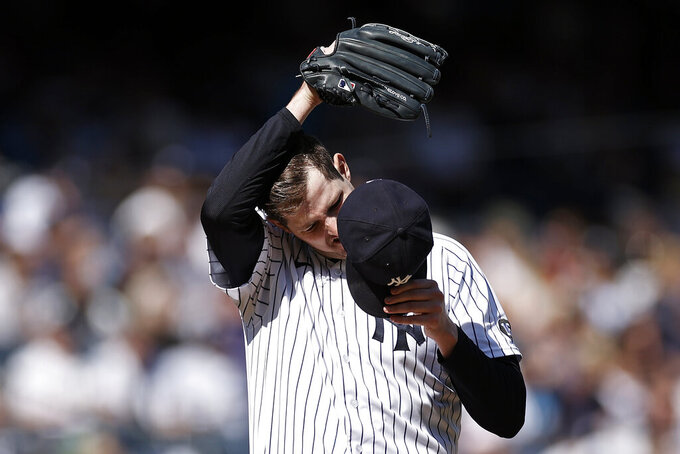 The New York Yankees’ 12th consecutive season of failure had just ended, and Aaron Boone made an obvious yet stunning admission.

“That needs to be front and center as guys prepare in the offseason and get ready for spring training next year,” Boone said after Tuesday night’s 6-2 loss at Boston in the AL wild-card game.

A flawed team overly reliant on right-handed hitters was streaky to even a greater extreme than in 2020. A 13-game winning streak, runs of seven and six consecutive victories and two spurts of five and four wins largely were offset by a seven-game skid, five losses in a row and four instances of four consecutive defeats.

Even after in-season moves to add Rougned Odor, Anthony Rizzo and Joey Gallo, Yankees left-handed batters were last in the majors with a .207 batting average, 26th in home runs with 53 and 28th in RBIs with 148. Their righties hit .249 with 169 homers and 518 RBIs.

“We just didn’t get the job done all season long,” said Aaron Judge, who along with Giancarlo Stanton were the only Yankees batters to produce as expected. “Every bit of me can’t believe it ended like this. It’s not what we wanted, what we imagined.”

Ace Gerrit Cole faltered down the stretch, especially after a hamstring injury, and didn’t get out of the third inning in the wild-card game. But the biggest culprit this year was offense.

“It’s not baffling. I saw it,” Stanton said.

With baseball’s second-highest payroll at $203.5 million, behind only the defending champion Los Angeles Dodgers, and a history of hegemony, the Yankees project themselves as World Series winners. Their fans demand nothing less than a title.

Judge is eligible for free agency after next season, and the Yankees face a decision on whether to agree to a long-term contract likely costing more than $300 million.

“I want to be a Yankee for life. I want to wear these pinstripes for the rest of my career and represent this great organization and bring a championship back to the city. But you never know what the future holds for you. That’s kind of out of my hands,” he said. “All I can really do is continue to show up here, continue to try to lead these guys and give all I can for this team and this city every single day. And, whatever happens on the flip side of that with contracts and this and that, getting traded, it’s out of my control.”

Boone’s contract is up following his fourth season. It appears the Yankees will give him a new deal, but no decision has been made.

"I can spend all night sitting here with you giving you reasons why I think he should still be the manager,” Judge said.

“Unfortunately, I’ve felt this far too many times and far too often,” he said after the elimination. “Being here at Fenway, seeing them celebrate and getting knocked out here at Fenway will add a little extra fuel to the fire this offseason when guys are working hard behind the scenes and hopefully lead to better results next season.”

First baseman Luke Voit, center fielder Aaron Hicks and pitcher Corey Kluber missed much of the season because of injuries, and reliever Zack Britton will be sidelined next year after Tommy John surgery.

Catcher Gary Sánchez and shortstop Gleyber Torres were defensive liabilities, and Sánchez had just 54 RBIs and Torres 51. Gallo struck out 88 times in 188 at-bats after he arrived.

Closer Aroldis Chapman struggled at times, and Cole was the only starting pitcher who averaged at least six innings.

But as far what changes general manager Brian Cashman should make, Gardner says those concepts are more difficult to define.

“Obviously,” he explained, “as one of the guys that’s in that room and being here as long as I have, if I don’t necessarily know the exact answer, I’m not sure who does.”