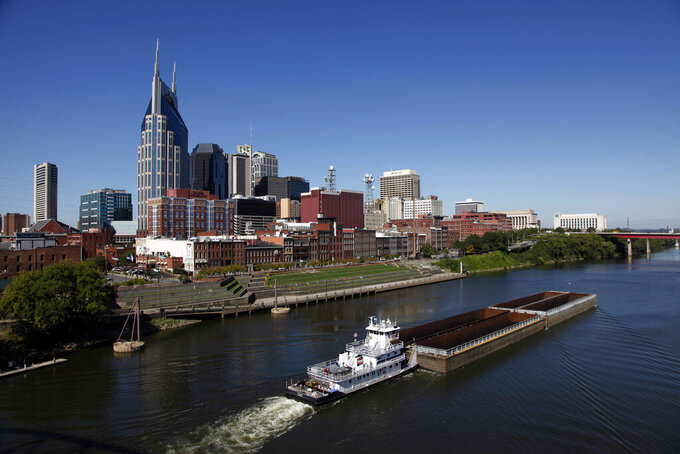 According to documents obtained through a public records request, the Department of Tourist Development paid an estimated $11,000 to at least 11 local influencers to post on Instagram, Facebook and TikTok touting the new program. Emails show the state had originally budgeted $30,000 for influencers.

To date, the state has spent more than $230,000 out of its $270,000 tourism marketing budget to advertise the program online. That has raised eyebrows among both Republican leaders and Democratic lawmakers wondering why tax dollars are being spent on tourists' airfare.

The program has faced even further scrutiny after it was unveiled around the 4th of July holiday weekend just days after Republican Gov. Bill Lee halted extra federal unemployment aid for low-income Tennesseans who had been affected by the COVID-19 outbreak. The reveal — which included a promotional video with country music star Brad Paisley — caught state leaders off guard, sparking the Tourism Commissioner Mark Ezell to later apologize last week to a legislative panel on his agency's rollout of the program.

Lee, who is running for reelection in 2022, proposed setting aside $2.5 million of state funds in his 2021-22 fiscal year budget. The line item, listed as “marketing project” under the tourism agency's budget, was passed by the GOP-controlled Statehouse with no debate or discussion on how it would be spent from lawmakers.

Yet on top of the $2.5 million, the state also allocated $100,000 for video programming, $30,000 for YouTube promotions and $50,000 for Facebook and Twitter marketing, according to the agency's emails. Another $120,000 was spent on video production, but Brad Paisley “was not paid for his participation,” said tourism spokesperson Amanda Murphy in an email.

The Nashville office of the marketing company used by the state, VMLY&R, reached out to tourism and lifestyle social media influencers in the state, many of them in Nashville and with a heavy focus on Instagram, the records show.

Influencers include The Nashville Guide, The Nashville Mom, Chattanooga Guide and OnlyTennISee, who all posted about the Tennessee On Me campaign on Instagram on July 4. The documents do not say how the state paid to each account.

The program initially required booking at least a two-night nonrefundable hotel stay, with one or more nights from Sunday through Wednesday, in four cities: Nashville, Knoxville, Memphis or Chattanooga. Amid pressure, the state expanded the cities to include the Tri-Cities area of Bristol, Johnson City and Kingsport.

The airfare vouchers can be used anywhere, though the state is hoping they'll be used on flights to Tennessee. Ezell said the state could not limit the vouchers and remain on the quick timeline they wanted to help recoup revenues being lost because of unfilled hotel rooms in the larger cities.

“In order to do that, the reservation systems and the process that we could do had to be done this way," Ezell said in an interview. "It wasn’t able to be done the other way and still be timely is how we made that. And the offer is open to Tennesseans too, and all 50 states and even international travelers.”

Ezell said the program is about hotel incentives in cities that are still feeling the loss of conventions, business travel and international visits.

“Those four larger cities are 100% of the tax revenue shortfall in hotels,” Ezell said. “In March, the state of Tennessee was down about $7 million in sales tax and those four cities, Nashville, Memphis, Chattanooga and Knoxville were more than $7 million down.”

The Tri-Cities area was not the only place concerned about the list of places included in the program.

Ken Maples, a commissioner for Pigeon Forge, emailed Ezell this month, asking about promoting the Smoky Mountains and Sevier County, which have seen significant visitor traffic during the pandemic.

“I assume this is the ‘continual thanks’ we get for carrying the state through Covid… and always a solid financial supporter of the state coffers,” Maples wrote.

Ezell responded by comparing the program's focus on cities hurt by restricted business and international travel to the aid offered in the Smokies after deadly wildfires there in 2016, totaling more than $5 million.

“Hotels in those four cities were willing to offer immediate discounts because unlike businesses in Sevier County, many of those hotels have occupancies during the week of under 40%,” Ezell wrote. "I am very grateful for the tremendous work being done by the partners in Sevier County."