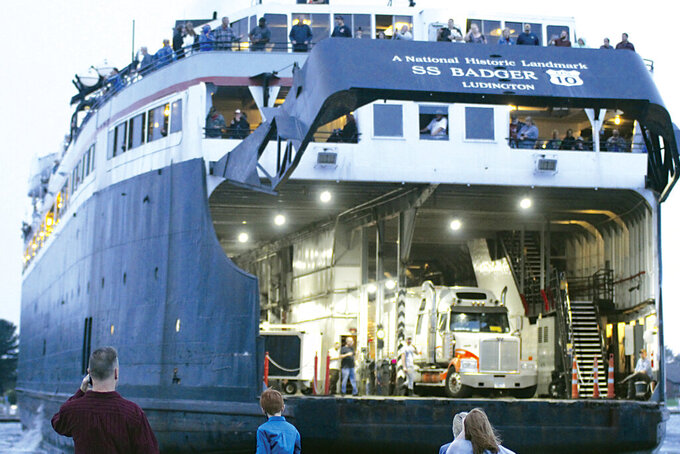 Justin Cooper, ASSOCIATED PRESS
People watch as the S.S. Badger backs into its docked on Sunday, Oct. 10, 2021, for the final time for its 2021 season in Ludington, Mich., and ending nearly five months of daily round trips across Lake Michigan. (Justin Cooper/Ludington Daily News via AP)

LUDINGTON, Mich. (AP) — The SS Badger backed into its dock Oct. 10 for the last time this season, letting about 300 passengers off into Ludington and ending nearly five months of daily round trips across Lake Michigan.

A stream of water arced from a fire engine’s aerial ladder near the Port of Ludington Maritime Museum as the Badger crossed into Pere Marquette Lake for the final time this year, the Ludington Daily News reports.

Outside The Lake House, a wedding venue near the Badger’s dock, a group watched it come in to the tune of “God Bless the USA.” A bagpiper blared from an upper deck of the ship, not to be drowned out by the patriotic tune.

The Badger’s first sail of the season was on May 20. It crossed the lake to Manitowoc and returned each day since, except for eight days in August following a crew member’s positive test for COVID-19. Minus those eight days, that makes for about 135 round trips this year.

Despite the COVID-19 incident, Lake Michigan Carferry was “able to have a pretty good season overall,” said Shelby Soberalski, director of marketing and sales for LMC.

“We’re really excited to be with Interlake, and we are really looking forward to a bright future with them,” she said.

Waiting for the Badger to come in on the rocky bank of its docking area, Mary Mitcheol reminisced about a childhood spent watching carferry traffic dwindle until only the Badger remained.

The remnants of old, unused docks made her a bit sad, but she said she loves “the fact that new families get to ride the Badger and have the same experience.”

“One thing I always notice is I feel like it’s my Badger, because it’s been my whole life,” Mitcheol said, “but when you’re out there watching it come in, you hear people talk about it the same way. Everybody feels this personal connection with it.”

Taking shelter from the light rain that built up during the docking, passengers Tim and Deb Johnson of St. Joseph watched the disembarking passengers and LMC employees shuttling cars off the ship.

After spending four days in Wisconsin, the Badger’s return was the Johnsons’ first time on the ship — even though Tim’s uncle was Bernard Robertson, appointed the Badger’s first captain in 1953.

Tim said the Lake Michigan crossing was “cold” and “rough.”

The Badger’s Wisconsin-bound passengers included Greg Sheets of Walkerville, Indiana, intent on completing a loop tour around Lake Michigan. Chatting with him by their cars was David Cizmas, headed for their home (and their grandchildren) in Redmond, Washington.

For longtime Badger passenger Brink Chiferri, of Minneapolis, the Badger’s last Wisconsin trip of the season may also have been his last, as his parents in Ludington are moving.

“I’ve been using this boat for 20 years to go back and forth between Wisconsin and Minnesota,” Chiferri said. “This is the last trip of the season and my last trip for a while, too.”

The Badger isn’t going anywhere, though. Soberalski said LMC is “really excited” to get planning for the next season underway soon. But, she said, the company couldn’t do it without its passengers.

“We really appreciate all the passengers that sailed with us and keep our legacy alive,” Soberalski said. “Our passengers are amazing. … We’re just so fortunate to have all those repeat people come back, (and even see) a lot of new faces this year.”