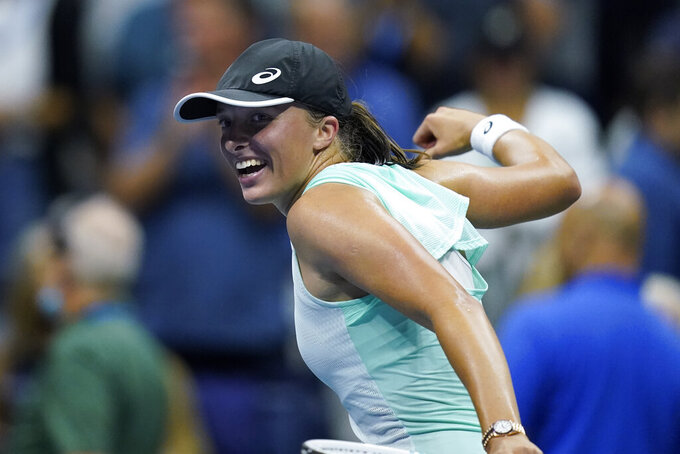 NEW YORK (AP) — Iga Swiatek dropped four points in a row in her U.S. Open quarterfinal against Jessica Pegula by missing shots, some wildly. So with Pegula up by a break at 3-2 and serving at 30-love, Swiatek walked over to the sideline in the middle of a game to swap out her white racket for another one.

The Arthur Ashe Stadium roof was open, the 70-degree air was as cool and dry as it's been during a hot, humid tournament, and Swiatek figured maybe she should try a tighter string tension to see whether that would help control the ball a little more.

Whether that actually did the trick, or simply put Swiatek's mind at ease, the move certainly swung the direction of the match. The No. 1-ranked Swiatek grabbed 14 of the next 15 points and, while closing things out was not easy, she reached her first semifinal at Flushing Meadows by pulling out a 6-3, 7-6 (4) victory over Pegula on Wednesday night.

“I don’t know if it actually was the key or something,” Swiatek said after a match filled with a combined 13 breaks of serve, 10 in the second set alone. “For sure, I wasn’t thinking about the strings (anymore), and I just focused on the right stuff after the change.”

When play resumed, Swiatek popped up a short return that floated toward Pegula, who rushed a backhand swinging volley that landed out. That was followed by three forehand errors in a row by the No. 8 Pegula, the highest-ranked American player.

“I started missing everything for literally the rest of the set,” Pegula said between sips from a can of Heineken. “It was definitely a huge momentum change. I think it helped her a lot. So it was a good move by her. ... I was just going for too much. The games kind of flew by."

Swiatek will face No. 6 seed Aryna Sabalenka of Belarus in Thursday’s semifinals. The other women’s semifinal is No. 5 Ons Jabeur against No. 17 Caroline Garcia, who eliminated 18-year-old American Coco Gauff on Tuesday.

Swiatek, a 21-year-old from Poland who won the French Open in 2020 and this June, twice failed to serve out the victory Wednesday, at 5-4 and 6-5 in the second set. But she was better in the tiebreaker, and when Pegula missed a backhand to close the contest, Swiatek ran toward her guest box, flung her racket and yelled.

Swiatek compiled a 37-match winning streak earlier this season, claiming the trophies at six consecutive events, but this is her first trip beyond the fourth round in New York.

“I wasn’t expecting that at the beginning of the tournament,” she said. “Trying to keep my expectations low.”

This marked Swiatek's eighth win in a row against an opponent ranked in the top 10, all in straight sets.

“I'm super proud of myself. My goal, basically, is to be consistent,” she said. “I remember when I was an underdog and every match like that was surreal. Now it feels pretty routine.”

Pegula, a 28-year-old whose parents own the NFL’s Buffalo Bills and NHL’s Buffalo Sabres, dropped to 0-4 in Grand Slam quarterfinals, including a trio of losses at that stage this season. All three of those came against a player atop the rankings at the time: Ash Barty at the Australian Open in January and then Swiatek at Roland Garros and Wednesday.

Of the four players remaining in the bracket, only Swiatek already owns a major championship. And only Sabalenka, who defeated two-time Slam runner-up Karolina Pliskova 6-1, 7-6 (4), ever has been this far at Flushing Meadows previously; she lost in the semifinals last year.

Bounced from the semifinals at Wimbledon last year by Pliskova, Sabalenka made sure from the start that this one would be different, taking a 4-0 lead.

This year, Sabalenka could not participate at the All England Club, because all players from Russia and Belarus were banned over the invasion of Ukraine. Sabalenka spent that fortnight in Miami, practicing and preparing for a return to the tour.

“It was a tough time, especially when I was working out in the gym and there was Wimbledon playing on the TV,” Sabalenka said. “I was always (turning) it off, because I couldn’t watch it.”