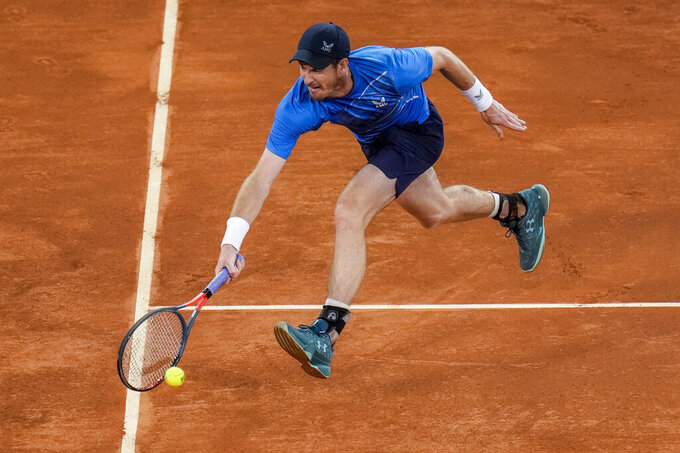 MADRID (AP) — Andy Murray withdrew from his showdown against Novak Djokovic at the Madrid Open on Thursday because of a stomach illness.

The announcement came not long before Murray was scheduled to take the court against the top-ranked Djokovic in the third round.

It would have been the first time Murray and Djokovic played against each other since Djokovic won the Doha final in 2017.

Murray had won his first two matches in Madrid, defeating Dominic Thiem and Denis Shapovalov. The former No. 1 hadn't won consecutive matches since January and hadn't played in a clay-court tournament in nearly two years.

Ranked 78th in the world, the 34-year-old Murray has been making his way up the rankings since having hip surgery in both 2018 and 2019. He had arrived in Madrid with a 10-8 record in eight tournaments. He lost the Sydney final to Aslan Karatsev in January.

Tour officials gave no further details on Murray’s illness. He had said after the win over Shapovalov that he was feeling fine physically.

With Murray's withdrawal, Djokovic automatically advanced to the quarterfinals — his second of the year after losing the Serbia final last month. He had lost in his first match in Monte Carlo in his first tournament on clay this season.

Djokovic is also trying to regain his best form after not being allowed to play in the Australian Open because he was not vaccinated. This is only his fourth tournament of the season. The Serb opened in Madrid with a two-set win against Gael Monfils.

Andrey Rublev, who beat Djokovic in the Serbia final, advanced to the quarterfinals after a hard-fought 7-6 (7) 7-5, win over Daniel Evans in nearly two and a half hours. The sixth-seeded Rublev converted just three of his 12 break-point opportunities.